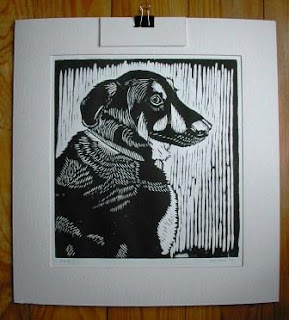 Nickie
12" X 13" woodcut
2006
Those of you who are familiar with my children's book, How to Catch a Lobster, will recognize Nickie -- the salty sea dog who really knows the ropes. Nickie is just getting back to work on the Anne Elizabeth after a long recovery from knee surgery. Captain Ed and his stern woman, Anne, are happy to have her back on board. We hope they're catching lots of lobsters on Penobscot Bay!
Posted by Leslie Moore at 12:26 PM 2 comments: 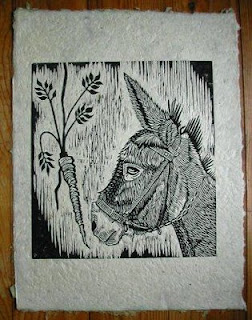 Incentive Package
12" X 13" woodcut
2008
Although my blog has been quite quiet these last two weeks, I haven't been idle. I've been busy carving ever bigger woodblocks. This donkey is a native of Sirince, Turkey, a tiny farming village in the hills above Ephesus. I'm going to submit him and Kate, the Border Collie, to the Common Ground Fair poster contest. You can read all about the fair on the Maine Farmers and Growers Association website.

I carved my donkey and his dangling carrot during the week my niece Bella was visiting from New Hampshire. Bella, almost 9 years old, keenly observed each step of the process. May be another woodblock artist in the making! She and I also read a book aloud together -- The Higher Power of Lucky, by Susan Patron (a great story!) -- and I helped outfit Bella for the Friday Fashion Show at Nichols Day Camp when she bemoaned the fact that she didn't have a THING to wear! Note the Italian "designer" dress with the maritime motif, the frog earrings, the Korean silk scarf, and beaded bracelets from French West Africa. The purple Crocs are hers! Such a fashionista! 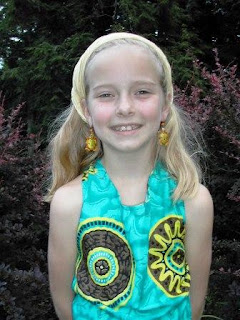 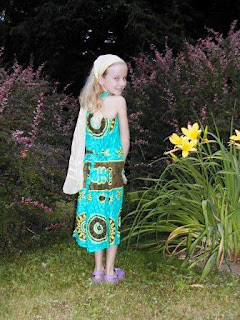 Stay tuned for another woodcut that I'll post as soon as it's been gifted.
Posted by Leslie Moore at 11:14 AM 2 comments: 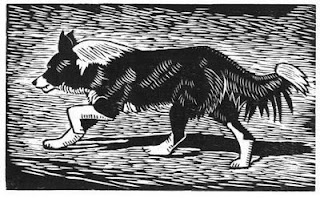 Kate, a Border Collie
6" X 10" woodcut
2008
I had the privilege of watching Kate in action the year I volunteered at Overlook Farm, the Northeast Learning and Livestock Center for Heifer Project International, in Rutland, Massachusetts. During a year’s sabbatical from teaching high-school English (1993-1994), I spent one day a week happily slopping hogs, fattening turkeys, milking goats, and admiring Kate. I also drew a calendar of farm animals and Kate was Miss December. 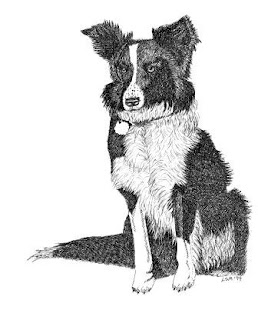 Miss December
8" X 10" pen and ink
1994
Kate was a canine cyclone of centripetal force. She was absolutely focused on her efforts to keep Overlook Farm’s diverse flock in line—sheep, goats, cows, a team of water buffalo, llamas, a camel, even the occasional errant hog, who probably outweighed her by a good 300 or 400 pounds. Kate executed her duties with determination, intelligence, and aplomb. Few of her furry charges could withstand the intensity of her unwavering stare. Neither could many humans. When she wasn’t busy bossing the farm animals around, Kate insisted on playing soccer with any two-footed minion she could corral. She was a fierce competitor! No mere two-footer ever scored against her.

I carved this woodblock of Kate thinking I’d submit it to the Common Ground Country Fair poster contest. Then I read their size preferences and realized that mine were way off. So, back to the cutting board! I’m about ready to embark on a new idea. Stay tuned for future woodcuts!
Posted by Leslie Moore at 7:56 AM 2 comments: 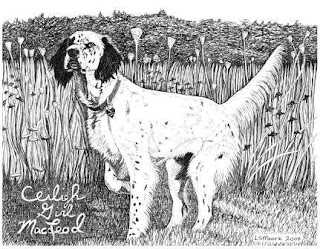 Ceiligh "Girl" MacLeod
8" X 10" pen and ink
2008
Ceiligh “Girl” MacLeod is a pure-bred English Setter. Isn’t she gorgeous with her black ticking, her white feathers, her luminous eye, and her elegant stance? I understand that her personality was every bit as poised as her physical presence. What a joy she was to draw! Happy Birthday, Scotty!
Posted by Leslie Moore at 7:13 AM No comments: