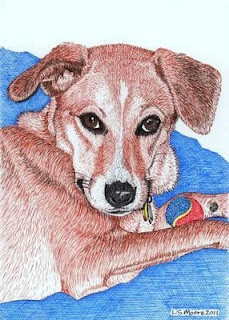 Lexi
5" X 7" colored pen & ink
2011
I'm having fun with my new colored inks. Lexi is a whippet-hound mix rescued from Alabama by the Coastal Humane Society of Brunswick, Maine. From the looks of it, she's settling in just fine in her new home.
Posted by Leslie Moore at 3:22 PM No comments: 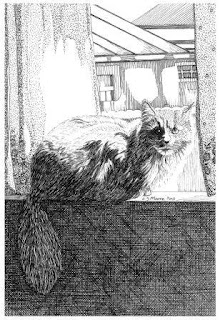 Kitty
5" X 7" pen and ink
2011
Although Kitty lived most of his long life in Worcester, Massachusetts, he spent one glorious summer here in Maine at his grandperson Nancy’s camp—catching mice, stalking bats, and bedeviling squirrels. Nancy, my sister-in-law, thinks nothing of throwing a cat in her car and driving six hours from Central Massachusetts to Downeast Maine for the summer. She likes the company of cats and she’s convinced that the cats like the good life in Maine. The exhilaration of dispatching rodents all summer long compensates for the humiliation of the long car ride for the cats. And Nancy’s cabin benefits from their rigorous vermin extermination campaigns. Nancy has brought three cats to her summer camp, just down the drive from our house—Kitty, Gregory (her own cat), and Boomer (another grandcat). 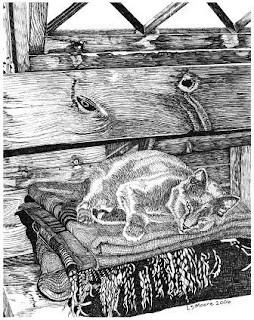 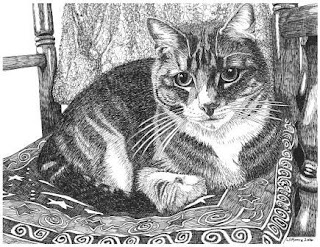 Boomer
Alas! None of Nancy’s consorts are still with us. They’re all in kitty heaven, which looks and feels a lot like the camp in Brooksville, Maine.
Posted by Leslie Moore at 4:27 PM 1 comment: 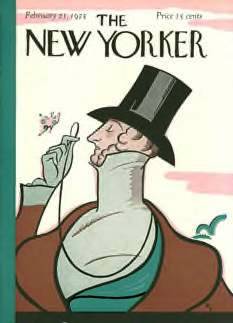 Eustace Tilley by Rea Irvin, 1925
This Eustace Tilley was drawn by Rea Irvin, the magazine’s first art editor, for the cover of the first issue of The New Yorker, in 1925, and has returned for nearly every anniversary issue since. For the past two decades, the magazine has invited contributing artists to reinterpret this iconic dandy, and in 2008, 2009, and 2010, readers have contributed to the Eustace Tilley Contest. The magazine is hosting the contest again in 2011, with a twist: This year, it’s the Eustace Tilley Book-Bag Contest. To celebrate The New Yorkers's 86th anniversary, the editors have invited readers to create a book-bag version of their iconic dandy. Twelve winners will be featured in a slide show curated by The New Yorker’s art editor, Françoise Mouly. One grand-prize winner will get his/her design printed on a Strand Bookstore tote bag and a $1,000 Strand shopping spree.

So, with great expectations and a tip of my mohawk to Steig Larsson, the late author of the Millennium Trilogy (The Girl with a Dragon Tattoo, The Girl Who Played with Fire, and The Girl Who Kicked the Hornets' Nest) I’ve uploaded my portrait of the famous New Yorker. 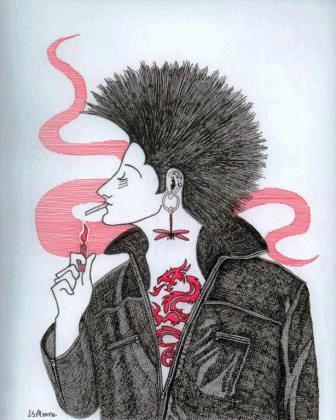 Eustace Tilley with a Dragon Tattoo by Leslie Moore, 2011
Click here if you’d like to see my Tilley in The New Yorker’s Gallery of Contestants, and check out the competition while you’re there! 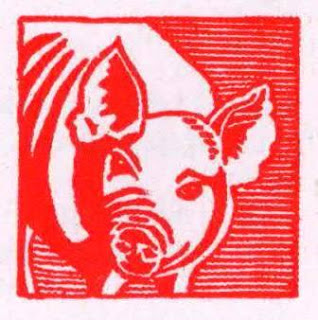 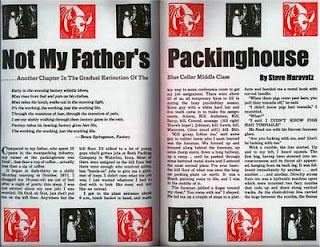 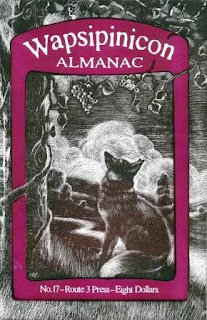 My little woodblock hog has found its way into the Wapsipinicon Almanac. This stylish and classy publication is edited and printed by Timothy Fay on ancient letterpress equipment in Anamosa, Iowa. It explores rural and small-town life in the midwest in such well-written prose and poetry that it makes me want to move there. It's also illustrated with lovely artwork, mostly pen-and-ink drawings and woodblock prints. This issue’s cover features a scratchboard drawing by Nancy Lindsay of Stone City. Even the advertisements are works of art. I'm proud to see my hog illustrating "Not My Father's Packinghouse" by Steve Maravetz, "Another Chapter In The Gradual Extinction Of The Blue Collar Middle Class."
Posted by Leslie Moore at 12:21 PM No comments: