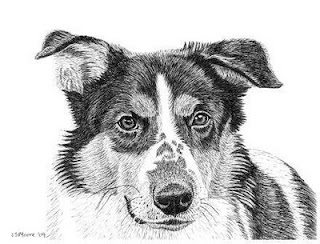 Moose
7" X 5" pen-and-ink
2009
Moose is all Down East dog. Part collie/part husky, and rescued from the Hancock County SPCA, he lives happily in Lamoine, Maine, with his adopted family of four. I think he's a handsome fellow. LOVE the cock-eyed ears!

As you can see, I've got my PenPets Etsy Shop up and running. Click on any of the images in the mini-shop to the right, and you will be taken directly to my shop, without passing "Go" and without collecting $200! Sorry folks! The shop is a work in progress. I'm trying to add a new species every day. No sales so far, but I'm hopeful.

My newly designed website is coming along, too, thanks to the hard work of my webmaster, Demetri. So stay tuned! there's lots more to come!
Posted by Leslie Moore at 7:23 AM 2 comments: 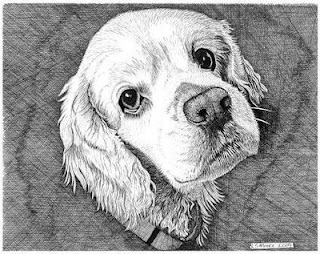 Honey
10" X 8" pen and ink
2009
Honey, a blonde Cocker Spaniel, is the subject of my newest commissioned portrait. I like the way her head is in the shape of a heart. Can you see it? Honey is obviously a real sweetheart. Her owner says, "This is how she most often looks at me." I hope I have captured that special look.

Today I tackle the awesome task of uploading my first few PenPets products to my Etsy Shop. I don't know why I'm so intimidated by this whole process. My friend Melissa says, "Remember, you cannot do it wrong!" Nevertheless, I get a queasy sensation in my stomach at each step of the way. I had to have another friend literally hold my hand as I sent PayPal all my banking details. Then it took me a whole morning of wrestling with my laptop to upload a banner for my shop. I am determined to do this, however. So bombs away! I'll even give you my address--www.PenPets.etsy.com--to spur me on. Please don't check it till this evening. Of course, the power may go out today. We've had another foot of wet, heavy snow that is smothering all the tall shrubs in our yard and bending over a few thin trees.
Posted by Leslie Moore at 5:39 AM 3 comments: 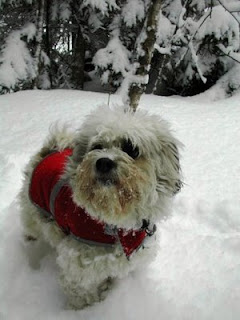 We've had a foot of new snow in the last two days and Kinsey was out tracking foxes in the fresh stuff this afternoon. Then I spoiled all her fun by rounding her up and bringing her inside. 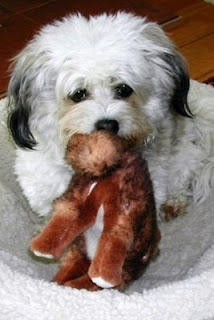 Here she is with her toy fox by the tail. I keep telling her that a real fox would do a lot more than squeak when she bit it, but she's fearless. God forbid she should meet a coyote, who would carry her home for dinner, little red jacket and all! 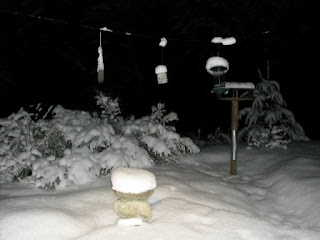 Here are the bird feeders outside my studio window tonight. Spring looks like it's a long way off.

Do All Cats Look Alike? 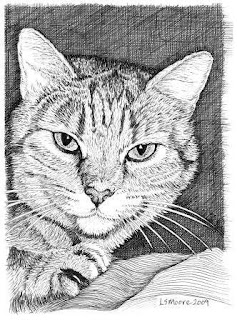 Checkers
5" X 7" pen and ink
2009
Here is my first cat commission of the year, a study in concentration and clarity. Checkers looks like she's ready to jump a whole row of pieces and clear the board in one deft sweep.

My husband says that all cats look alike. I disagree. Here are a few tiger-striped faces to compare and contrast. "All feline," Tom argues. "All distinct," I counter. What do you think? 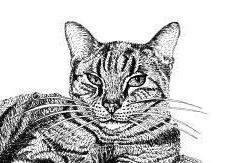 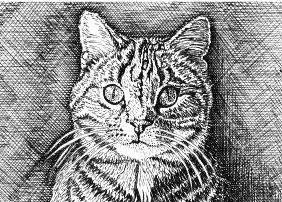 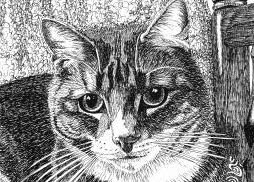 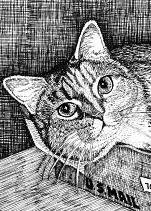 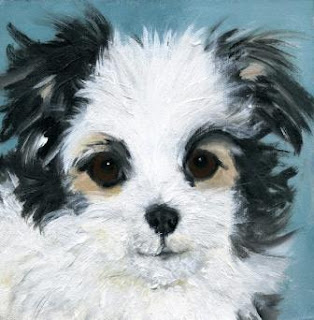 Kinsey
by
Leigh Jackson of Noisy Dog Studio
8" X 8" acrylic on canvas
I love the wild hairdo, the big brown eyes, and the quirky little smile. It's Kinsey! She's thrilled, of course. We all are!
Posted by Leslie Moore at 1:43 PM No comments:

Leigh Jackson of Noisy Dog Studio has made a call for photographs of our dogs along with their life stories for her 2009 Faces of Love project. She'll paint dog portraits all year long and then include the top 12 portraits and stories in her 2010 calendar. And, guess what? She's painting Kinsey's portrait this week! So Kinsey may become a real star! Leigh's challenge prompted me to write Kinsey's exotic life story. It will appear on my newly rennovated PenPets website soon. Here's a sneak preview of the photo I sent Leigh and Kinsey's story for our faithful blog followers. 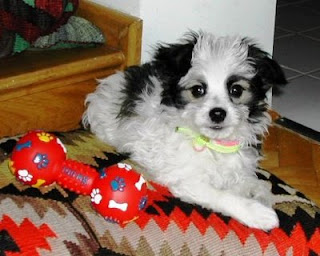 Tom and I had been living in Turkey for one year when Roger, our beloved Westie, died. He was 16 years old and, although his body had failed him on many fronts, his personality sparkled right up to the end. He charmed every soul he met at the Koç School where we taught English. We were devastated at his loss. I promised Tom that I would not even think about getting another dog until we returned to Maine a year later. My resolve lasted three months. Finally Tom told me to “go get another dog! I can’t live with you like this,” he said. 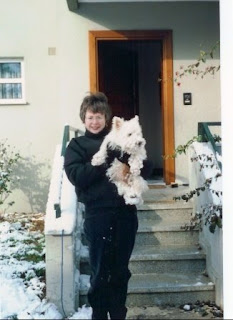 I called Dr. Süleyman at the Teleskop Pet Shop in Istanbul and asked him if he had any small terriers for sale. “I get a shipment from Hungary on Tuesday,” he told me. “You come,” he ordered. “Right away!”

Tom had to supervise an after-school study hall that Tuesday, so I embarked on my adventure alone. We lived on the Asian side of the Boshphorus. I drove our Volkswagen Polo to Kadiköy and took the ferry across that great waterway with the whole panoply of Istanbul spread out before me—the domes of Hagia Sophia, the six minarets of the Blue Mosque, the massive walls of Topkapı Palace, the Galata Bridge floating across the mouth of the Golden Horn. At Eminönü, I pushed through the crowded ferry terminal, crossed a sea of speeding cars on an overhead pedestrian walk, circled the Yeni Mosque, and found the entrance to the Bird Bazaar, a warren of narrow streets lined with packed cages, redolent of animal smells, and ringing with squawks, squeals, chirps, meows, and woofs. The Teleskop Pet Shop was half-way up on the left. 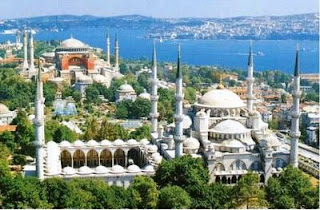 The Blue Mosque, Hagia Sophia, and the Bosphorus

Dr. Süleyman met me at the door and escorted me up a crooked set of secret stairs that led to the kennel, a room full of cages and every dog imaginable, from giant Turkish Kangals, to to German Shepherds, Rottweilers, and Boxers, to a matched pair of Fox Terriers, to Pekinese, Pomeranians, and Poodles, to a clutch of tiny puppies in a box. He handed me one of the pups, no bigger than a Guinea pig, with white fur, curly black ears, and a tan saddle across its back. “This is best one,” Dr. Süleyman announced. “You take,” he urged. “A Bolognese Terrier,” he said with a flourish. Kinsey bit my thumb with her sharp, puppy teeth, then kissed my chin with her sweet, pink tongue. I knew she was the one for me. 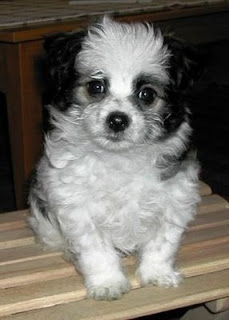 Kinsey came back to the Koç School with me, where she promptly came down with the worst case of parasites that Dr. Banu, our vet, had ever seen. Kinsey spent a week in the Anatolia Animal Hospital off Bağdat Street getting IV’s packed with drugs, and I spent the week getting fierce lectures from Dr. Banu on the pitfalls of buying pet store puppies. Both Kinsey and I survived the ordeal. 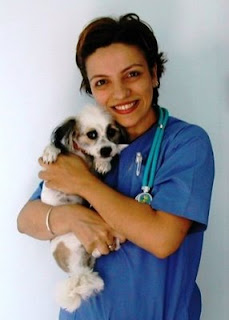 Today Kinsey rules over our roost—all 12 tiny pounds of her—on the coast of Maine. She is our Alpha Princess—connoisseur of soft laps, the best chair in the house, the vast majority of our bed. She is also our self-appointed Homeland Security Czarina. Beware all chickadees, chipmunks, and unsuspecting UPS men! Sometimes I ponder her lineage. I feel sure that she was born in an ancient castle in Hungary, not a puppy mill at all, to a royal Bolognese mother with a long pedigree and a common rat terrier father of fierce mixed breeds. Woops! When strangers ask, I say she is part frou-frou, part terrorist. 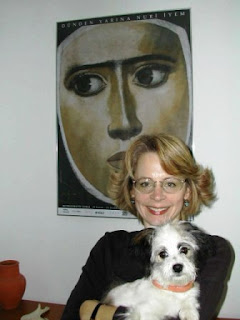 Kinsey & Leslie (with my Turkish haircut!) 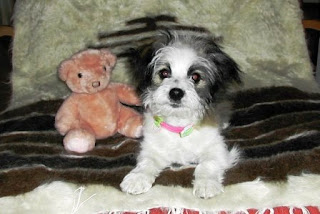 Kinsey with her Teddy 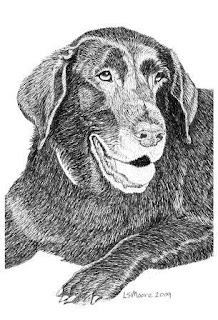 Herschel
5" X 7" pen and ink
2009
“The main difference between animal emotions and human emotions is that animals don’t have mixed emotions the way normal people do. Animals aren’t ambivalent; they don’t have love-hate relationships with each other or with people. That’s one of the reasons humans love animals so much; animals are loyal. If an animal loves you he loves you no matter what. He doesn’t care what you look like or how much money you make.”
Animals in Translation: Using the Mysteries of Autism to Decode Animal Behavior
Temple Grandin and Catherine Johnson
Posted by Leslie Moore at 3:54 AM 1 comment:

Kinsey thinks I need to brighten my blog palette this bleak mid-winter in Maine. With that in mind, she's offered to share a few spots of color from her "FiberKins" collection. Here's how Kinsey stays warm and stylish is sub-freezing temperatures. 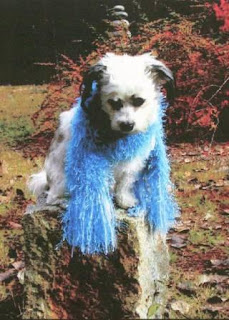 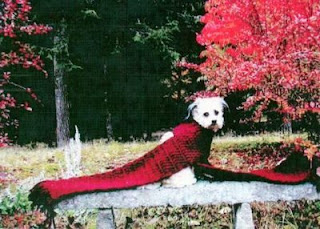 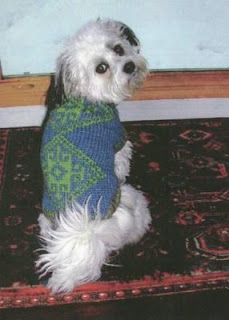 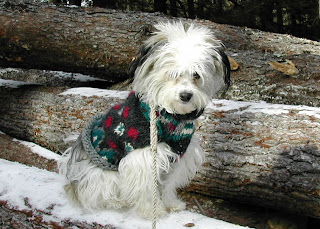 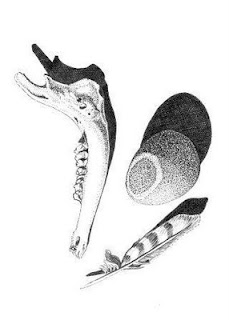 70
5" X 7" pen and ink
2009
I've just finished this drawing as a 70th birthday present. Can you see the 70? (Tom says it's a stretch!) I was inspired by watching a documentary about Alan Magee, the Maine artist who paints incredible trompe l'oeil beach stones. Here's one: 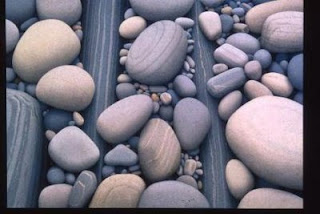 But now I'm in a quandary. I've been turning my drawing around and around, and wondering if it doesn't make a better composition upside-down, with the shadows beneath the objects and all of them pointing upwards. Of course I lose the 70 motif, but maybe it's not strong enough anyways. How does it look like this? 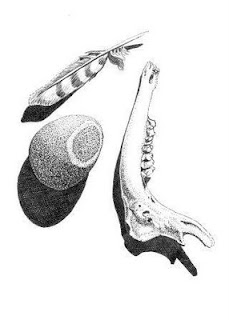 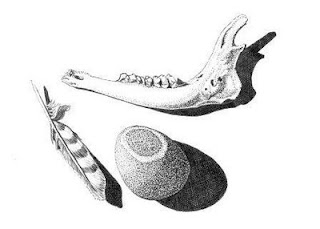 What do you all think? I'd love to hear your opinions. I have a week to make up my mind.