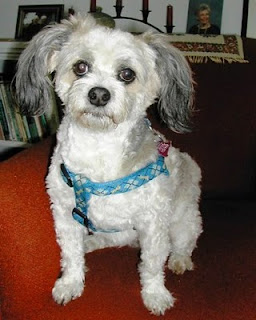 Kinsey
Not to be outdone by a passle of pure-breds strutting their stuff down the Westminster runway, Kinsey spent an arduous morning at the beauty parlor yesterday. Here's our little champion! It's all about ears in this year's "designer dog" class!
Here she is before all that "pampering." 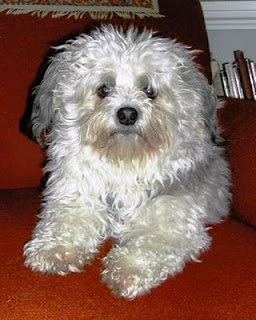 Cuzco, Center of the Universe 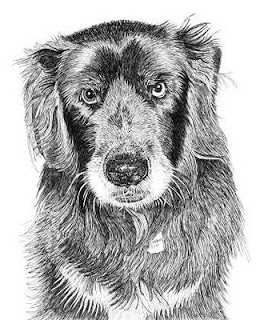 Cuzco
8" X 10" pen and ink
2010
Cuzco is a 13-year-old Border collie mix, with one brown eye and one blue one, and he’s lucky to be alive. He’s had five near-death experiences in the course of his long life, one that deprived him of the use of his hind legs, although it didn’t diminish his spirit in the least. Cuzco greeted me boisterously and enthusiastically when I went for a visit. He graciously posed for a slew of photographs, never taking his eyes off his people. It was difficult to say who doted on whom the most.

Here’s how Cuzco got his name:

“My husband I and our two children went to Cuzco, Peru, as part of our visit to Machu Pichu. All four of us fell in love with Cuzco. The energy in the city was vibrant and alive. Then we discovered the name, Cuzco, means both umbilicus and center of the universe. Cuzco was right in the middle of the Inca Empire, which stretched equally north, south, east, and west from that hub. When we found our beloved dog at the shelter six months later, it was easy to name him Cuzco, or center of the universe! That has clearly been his place for us over the past 13 years.” ~Vicki
Posted by Leslie Moore at 10:20 AM 3 comments: 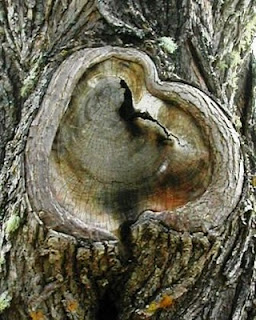 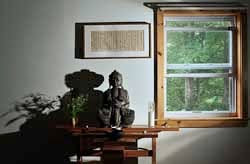 Treetop Zen Center
Last Saturday, Tom and I attended a poetry workshop at the Treetop Zen Center near Waterville: "A Day with the Zen of Emily Dickinson and W.S. Merwin" facilitated by Peter Harris, a Colby College English professor. Here's how Peter described the workshop: "Emily Dickinson never heard of Zen, but her poetry is shot through with Zen-like insights. Pulitzer Prize winner W.S. Merwin is a Zen student who shuns the label of Zen poet. We’ll read some of their poems, talk about what they have to offer, and write a little in response. No experience with Dickinson, Merwin, or Zen is necessary. Just bring pen and paper."
We read Merwin in the afternoon and this poem about an old dog had all of us ready to weep:
THE NAME OF THE AIR
It could be like that when the beloved
old dog finding it harder and harder
to breathe and understanding but coming
to ask whether there is something that can
be done about it coming again to
ask and then standing there without asking.
W.S. Merwin 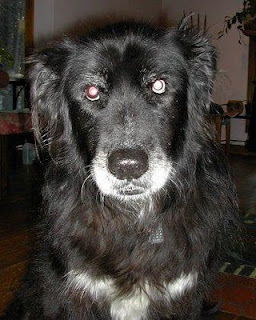 Cuzco
I'll be drawing Cuzco this week, an elderly fellow who, although he's lost the use of his hind legs, still has a lot of life left in him. Doesn't he look like he's asking us something?
Posted by Leslie Moore at 3:42 AM 6 comments: 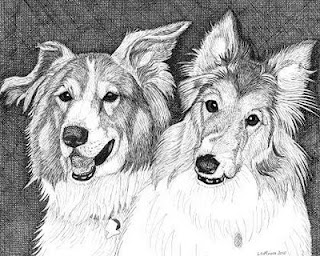 Meghan & Missy
10" X 8" pen and ink
2010
I couldn’t draw these two lovely lassies without harkening back to Sunday night episodes of Lassie on our black-and-white TV, my three brothers and I, crowded onto the couch in our pajamas, wiggling our drop-seat fannies, dangling our rubber-soled feet over the edge, elbowing each other, and eagerly awaiting Timmy’s next catastrophe and Lassie’s new heroism. Am I dating myself? 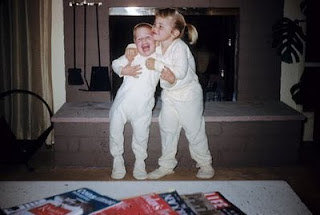 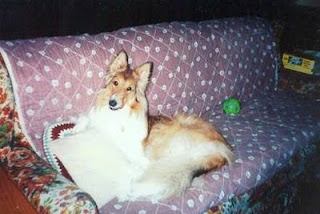 Missy
Missy is a purebred rough-coated collie, not unlike Lassie. “You might notice,” Terri points out, “that Missy’s nose is slightly bent to her right and her lower jaw is shorter than her upper jaw. Thus, her lower teeth always show as if she’s smiling.” 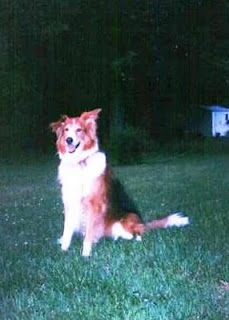 Meghan
Meghan was a collie/Brittany spaniel mix and—Alas!—no longer alive. “Meghan had a lot of collie characteristics,” Terri says, “but her ears could go up, out, or flop, whereas Missy’s ears always stand straight up.” Meghan was a happy dog; Missy is, too.

Again, I faced the challenge of bringing two dogs together—in this case, two dogs who had never met each other in real life—in the same drawing. My challenge was compounded by the fact that the photo references weren’t as close-up as I would have liked, the details not as clear. But I loved Meghan’s fly away ears in the night scene and Missy’s cocked head, skewed nose, and crooked smile in the couch scene. So I squinted and drew and remembered Timmy in trouble—yet again!—shouting “Get help, Lassie!” and Lassie bounding over hill and dale on her mission to bark some silly person into sensibility. She always saved the day—yet again!—in under 30 minutes. It was a fun week of drawing!
Posted by Leslie Moore at 2:13 PM 2 comments: 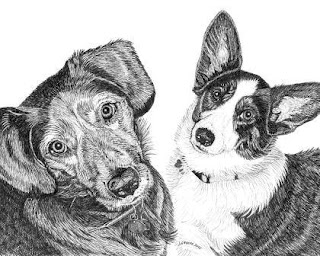 Marley and Kingsley
10" X 8" pen and ink
2010
Marley is a beagle/Australian shepherd/boxer mix adopted from the Humane Society. “He is a total lover,” his adoptive mother, Karen, reports. “He's never met a stranger. He likes to be within arm's length at all times, just in case there are pettings to be had. He's pretty mellow and would be content spending all day lying around with me.”

Kingsley is half Cardigan Welsh corgi and half Pembroke Welsh corgi—“the best of both worlds” says Karen. “He has a long tail but he's not quite as big as a pure Cardigan. He is the consummate little brother. If Marley is playing with a toy, Kingsley wants to play with that toy. If he gets it, he plays keep-away. It's only fun if Marley wants the toy, too. If Marley is getting attention, then Kingsley wants to get attention. Kings loves to play fetch and run. At the dog park, he likes to play with the big dogs, even though his stumpy little legs make it hard for him to keep up sometimes. And, of course, while Kingsley is running himself silly at the park, Marley is making the rounds among the people trying to find the person who will pet him the most. They're both very silly and sweet, and they get along really well—often giving each other tongue baths when they're lying on the couch together.” 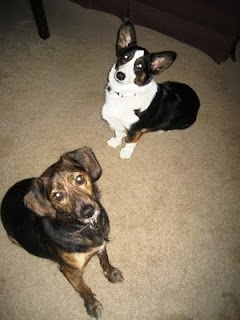 It’s always tricky to incorporate two or more animals into the same portrait, and to make them look natural and dynamic at the same time. Karen sent me four photos of her fellows, all great ones. I focused in on this one immediately. I love the heads cocked left and right. All I had to do was to move the dogs closer together for a more chummy look. Since they’re both dark around the edges, I left the background white, but I had to cut off a bit of ear from each dog, Van Gogh style, in order to fill the frame with their faces. I filled the frame so well that I didn’t leave any white space for my signature. Hmmmm! I finally snuck it in on a swirl of fur, tipping my pen to Al Hirschfeld, the New York Times artist, who hid his daughter’s name, Nina, in his pen-and-ink caricatures, sometimes multiple times. Here's a self portrait with two Nina's that Hirschfeld drew at age 99! (He died in 2003 at 100.) I hope I'm still drawing such true lines when I'm that age! 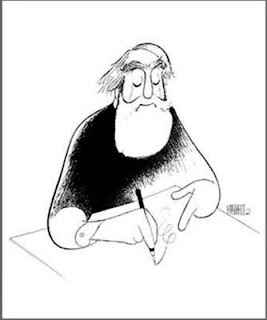