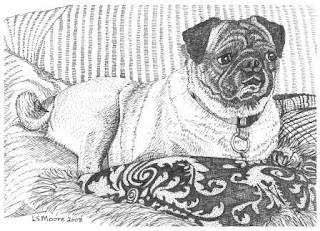 "Katrinka"
I drew this Pug for my step-sister's daughter, Camden, who will graduate from UCLA this spring. Congratulations Camden and good luck in your next venture! 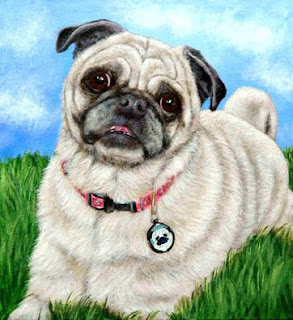 I owe a debt of gratitude to Linda O'Neill of Abby Creek Studios for introducing me to blogging and encouraging me to give it a try. Linda lives in Boulder, Colorado, and she paints wonderful dog portraits, still lifes, and abstracts. She has a muse named Maisie who makes many appearances in her Abby Creek Art blogspot. It's a fun place to visit!

Melissa Langer, of Louisvile, Colorado, is a friend of Linda's and she is a real connoiseur of Pugs. The inimitable Emmitt is her muse, subject of many of her Pug paintings, and the star of her blogspot -- Life is Art...Art is Life . Melissa not only paints Pugs, but she puts them on just about anything and everything that you can imagine, and on some things you'd never imagine at all! Melissa also has illustrated an ABC book of dog breeds, so she's not just a one-pug show.

I've already learned a lot about blogging, doing business, and making art from these two generous artisits. I'm sure they have a lot more to teach me. Thanks Linda and Melissa! 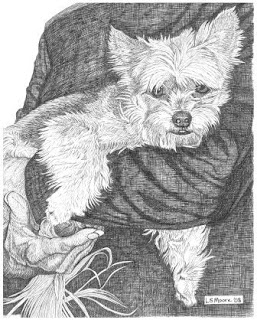 "Jinx"
Alyson, my best friend since Kindergarten, commissioned this portrait of Jinx for her mother, Marti’s, birthday. Jinx is a “designer dog”—one half Yorkie, one quarter Chihuahua, and one quarter Long-Haired Dachshund. Alyson and her family have always had designer dogs for as long as I can remember, and long before designer dogs were hot items. Whiskey and Tiffany, both Cockapoos, were Alyson’s childhood dogs. I thought they were incredibly chichi with their fancy French hair do’s and their bags full of little-dog tricks. My family, on the other hand, had retrievers—Tracy, a black Lab, and Charlie, a Golden—who got hosed off on the front lawn when they stank and who would fetch tennis balls for as long as we threw them, but wouldn’t stand on their hind legs and dance. Now Alyson has Lily, a Yorkiepoo or a Porkie, depending on which breed is ascendant.

Jinx started her life as Grace—“a wildly inappropriate name,” Alyson admits. Grace was to be Alyson’s designer pup, and Grace is lucky to still be alive. First Grace dove headlong into the swimming pool and almost drowned, wee thing that she was. Then Grace sailed off the second-floor landing and plummeted, not one floor but two, straight down to a hardwood floor, not once but twice! The first time Grace fell off the landing, she was miraculously unharmed, although everyone thought she’d be dead. The second time, Grace cracked her jaw and knocked out her front teeth, but remained determinedly alive. Shortly thereafter, Grace became Jinx, and Alyson selflessly gave her beloved but bedeviled pooch to her mom, who was in dire need of a canine companion at the time. It’s been true love ever since! Marti and Jinx are inseparable. Jinx even flies with Marti, traveling in her own little carry-on back-pack. When Jinx isn’t traveling with Marti, she has devoted herself to amassing the largest collection of squeaky toys on the West Coast of North America. She squeaks each toy in her collection on a daily basis. And, since Jinx got her new name, she hasn’t had one life-threatening mishap, although I still detect a glint of the dare-devil in her eye! 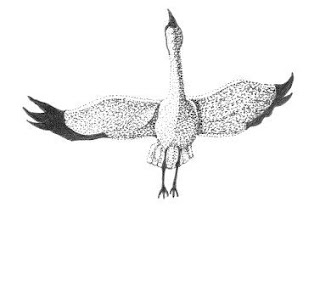 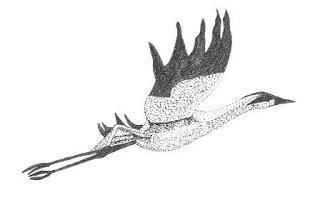 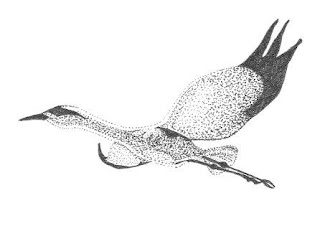 I drew these cranes for a Brooksville Free Public Library brochure. They are based on the magical, bigger-than-life, felted crane that soars over the children's section of our library. Fiber artist and neighbor, Mia Kanazawa created the crane and it is a magnificent sight to behold! Mia felts wonderfully whimsical animal sculptures and puppets--elephants, kangaroos, giraffes, camels, clownfish--a real Noah's ark collection!

When Tom and I taught at the Koc School in Turkey, flocks of cranes used to fly over the school on their way to Europe for the summer or Africa for the winter. The joke was that all the female teachers got pregnant when the cranes flew over! 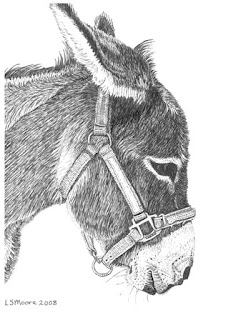 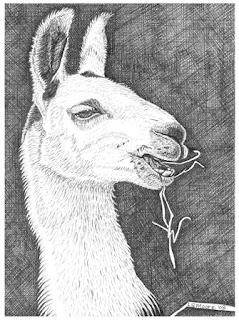 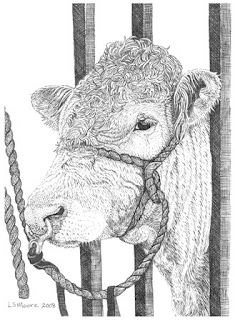 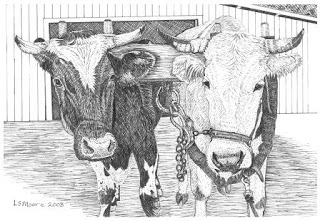 "A Couple of Coworkers"

Last fall I took my camera to the Blue Hill Fair and took shot after shot of the farm animals. This winter I finally had some time to draw a few of them. Stayed tuned! There are more to come. 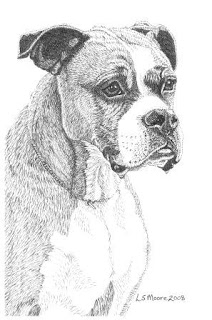 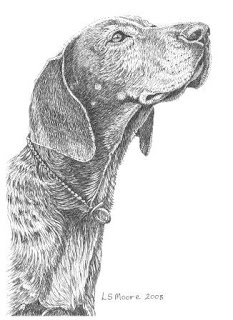 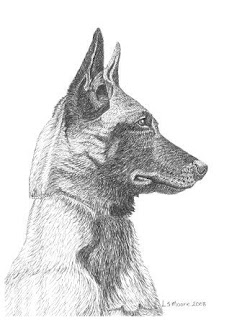 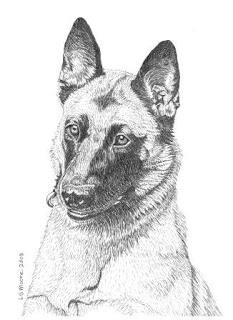 "Blue"
Two years ago Shannen commissioned a portrait of all four of her "girls" together. You may view that drawing on the Home Page slide show of my PenPets website. This year Shannen commissioned individual head shots of each "girl." Don't they make a stunning grouping! Leitzl, the Boxer, is so sweet and sincere, so tough and so vulnerable. Claire, the German Short-haired Pointer, is so elegant with her long, swan's neck. Can't you just smell the scent she's caught? And what about Reese's impeccable posture! She and Blue are both Belgian Malinois Shepherds. So alert! So attentive! I can't wait to receive the photo of all four portraits hanging in Shannen's new house in Seattle, Washington.
I had the pleasure of working with a whole CD full of Kelly Saunders' Bagaduce Photographs on this project. Kelly is one talented photographer and she lives in my town, Brooksville!
Posted by Leslie Moore at 6:40 AM No comments:

I've been drawing a lot of head shots this year, six dogs and five farm animals so far. Here are two new dogs for 2008--both rightside up and upside down! 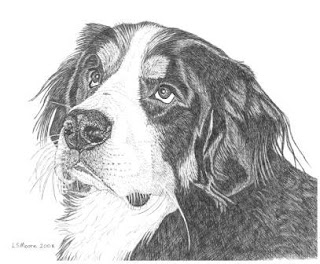 Logan is the much adored fur-child of my brother Evan and his wife Sue, an only dog/child. Do you think he's spoiled? He's a Bernese Mountain Dog--big, boisterous, and beautiful. When I visit Logan in Coarsegold, California, he loves to play tug-o-war with me 24/7. Guess who always wins! 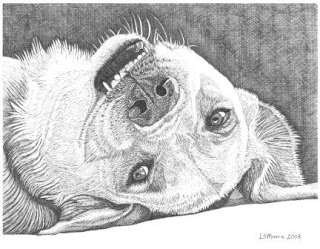 Gilmore, this silly boy, lives with my nephew and webmaster Demetri and his wife Joslyne in Nashville, Tennessee. He is a yellow Labrador and he, too, is an only dog. What a goof ball! Gilmore has a kitty sibling--Boomer. I drew a portrait of Boomer two years ago as a wedding present for De and Jos. I haven't met Gilmore or Boomer yet, but I hear that they are a couple of characters. 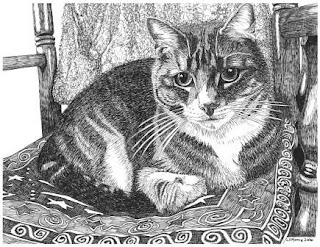