2009 has been a good year for PenPets, despite the economic downturn. I drew 32 PenPets commissions, two birthday presents, two Brooksville Breeze cover illustrations, and I carved one woodcut wedding present. Here’s the tally for PenPets drawings: 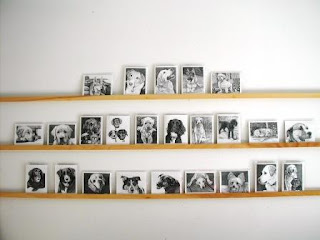 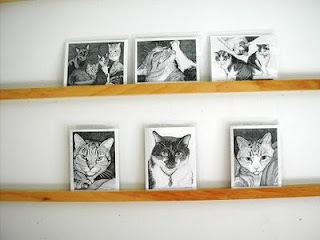 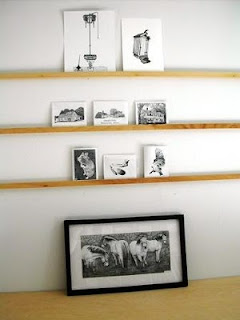 I was so busy drawing PenPets portraits that I didn’t get in much woodcarving this year, only 5 woodcuts: 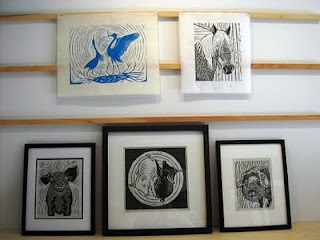 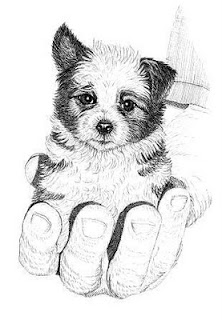 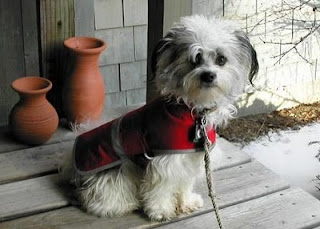 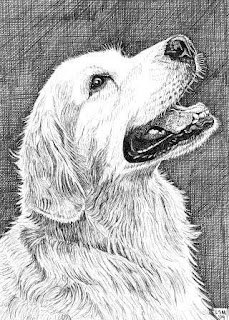 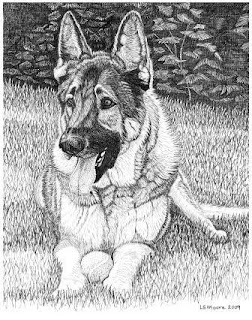 I don’t often have the pleasure of meeting my PenPets subjects. Many of them are far flung. Some of them have died before I draw them. Thus, I was doubly delighted to meet both Sailor and Bear.


Sailor and I had a photo op on the lawns of the Ellsworth Public Library. He is an elderly gentleman and absolutely charming as only a Golden can be. He arrived for the shoot with his own prop, a favorite tennis ball, which he can no longer chase but which he cherishes just the same. He was cheerful, cooperative, and fabulously photogenic. I took 25 shots of him, all of them good ones, each one showing a different side of his personality. Here are a few of them:

Rita and I went with the faithful pose, hoping it would sum up every ounce of what makes Sailor special. 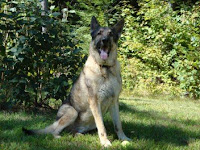 I met Bear, a huge and handsome German Shepherd, in the parking lot of Rooster Brother, a great kitchen shop in Ellsworth. Kerri warned me, as she swung open the back hatch of her Subaru, that some folks are afraid of Bear because of his breed and his size. But Bear didn’t live up to his ferocious exterior. He gave each one of us a sweet kiss on the nose and happily let me scratch his ears and compliment him. Bear is an oldster as well, with spine and knee problems. Although he can no longer chase his treasured tennis balls--doctor's orders--he keeps one near to paw at all times. Bear is a big-hearted fellow who talks to his people as if he were human. “He is not just our dog," Kerri says, "but a part of the extended family.” 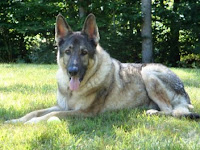 Candy and I had quite a time coming up with just the right combination of cats for her son Andrew’s Christmas present. Candy took over 60 photos of the three kitties and sent me a dozen of her best. We played around with five or six arrangements, all from separate photos, and finally came up with this one. Candy also put her heart and soul into her descriptions of the three cats. Here’s the gist of what she wrote. I hope it’s enough to give you the essential flavor of each cat and I hope I've captured their flavors in my drawing:


Harry, believe it or not, is 15 years old. He's the oldest of the cats. Andrew got him when he was in 7th grade as a reward for good grades. He was an only cat for 5 years and is the one Andrew is most attached to. Harry is like a dog. He's got such personality. People who hate cats love Harry because he is so sweet and gentle. He's at the door to greet you. He's a purrer and loves to snuggle against necks. He stays rather active, but not in a bad way. He loves to drink with his paws out of the kitchen sink faucet or bathtub faucet. He knows how to tell someone to turn it on so he can get a drink. This cat is part human, I swear.


Teddy is second in age, about 12, the photogenic one. He's Mr. Easy-Guy. Not a thing bothers him. He lumbers along at his own pace, never much one to hurry. He's only a lap-cat to Andrew. If Andrew lies on the bed or the sofa, you know Teddy will be right there, either right on the pillow or between his legs. Always. I love the pix of Teddy upside down; it is so Teddy. He so often is lying on his back, sometimes with his front paws over his eyes. I'm not sure it's useable for the drawing but I thought I'd send it along just in case.


Dexter, the youngest, is about 6 years old this year. He's Mr. Rambunctious. He's a tease to the other cats. Loves to play. He's always got his snout looking out the window. If the blinds aren't open for him, he'll ruin them by putting his face right through the slats so he can see outside. He loves playing with toys, tossing and pushing fluff balls around the wood floors and up and down the steps. Harry does this too. Teddy could give a hoot.

It's tough to make bookmarks (part of my packaged PenPets deal) of three subjects. I was pleased with my solution to this particular problem -- four separate bookmarks. 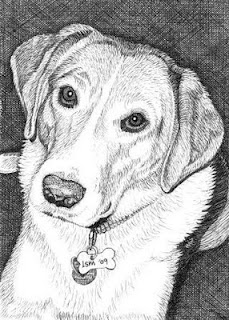 Holly, my cousin David’s wife, commissioned this portrait of Sadie, their yellow Labrador, for his birthday today. Sadly, Sadie left David, Holly, and their daughter Ashleigh last Halloween. I had a chance to meet Sadie at a mini-reunion of Smith family cousins in Virginia Beach in October. Although Sadie had cancer and was surely not feeling her best, nobody would have known she was suffering. She was a gracious and open-hearted hostess, sharing her toys and her good cheer with all who visited her house that day. I know she is well missed.

Last Christmas my wife gave me a painting she had commissioned of my dog Angus. Angus was a big, handsome Airedale terrier that loved to ride in Saab convertibles. I lost him two years ago and miss him terribly. The painting of him standing on the back deck of the Saab allows him to always be with me, and I see him every day. I was overjoyed by the gift and will treasure it always. It is also a testament to how thoughtful my wife is.

I hope David is overjoyed with Sadie’s portrait and that seeing her every day will be a treasure for him, too.
Posted by Leslie Moore at 4:02 AM 2 comments:

A Lion in Designer Dog’s Clothing 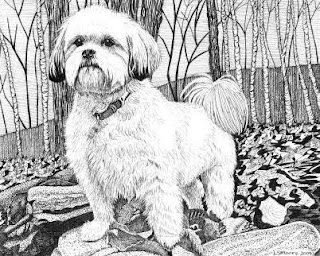 “This is our pet, Riley Panto,” wrote Laurie, Riley’s person. “A little rascal, two years old. Riley is a designer dog, ShihTzu Maltese. We named him Riley because he howled like Wiley the coyote on the first few nights. And we did not want to call him Wiley because our nieces and nephews would have trouble saying it. Riley is the perfect name. I am sending a few photos. My favorite is on the rock wall. We have seen so much of your work and are fascinated with it. Looking forward to seeing your magic with Riley.”

When Laurie and I debated a horizontal vs. a vertical portrait, Laurie chose horizontal. “He is not a very tall dog,” she wrote, “so he acts more horizontal than vertical.” Riley may be vertically challenged, but, what he lacks in stature, he makes up for in personality. He looks to me like he has the self-esteem of a lion. I hope I’ve captured that quality of supreme self-confidence in his portrait. 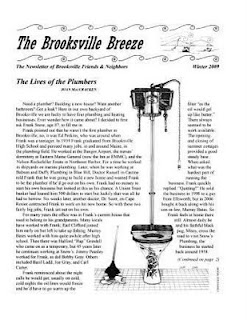 I think I have a potty theme going here. First an out-house, now a toilet, and on the front page of "The Brooksville Breeze" no less! This Victorian "throne" with plumbing problems illustrates Joan MacCraken's excellent article "The Lives of the Plumbers."  We have four plumbing and heating businesses in our small town of Brooksville with a year-round population of less than 1,000. There's probably a plumber in every household!
Posted by Leslie Moore at 5:54 AM No comments: