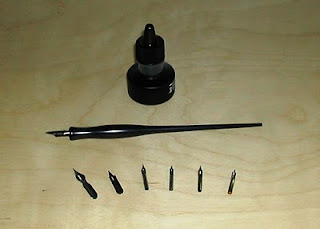 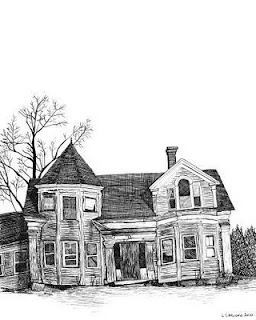 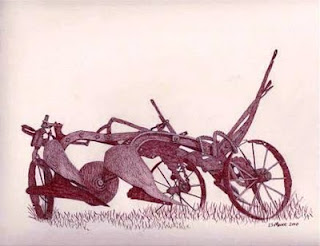 Horse-drawn Sulky Plow
10" X 8" pen and ink
2010
I've been experimenting with steel nibs, a dipping pen, and bottled ink, instead of the felt-tipped Micron pens that I use for my pet portraits. I've also been drawing inanimate subjects, although I like to think that my lilting house and sulky plow, abandoned though they are, still breathe. My house is due to grace the cover of the "Wife of Bath" literary journal in April. I drew the sulky plow with sepia-colored ink on cream-colored paper. Tom painted a wooden frame brown and cut a cocoa-colored mat for it, and it looks quite lovely! It will hang on one of our walls.

Next I'm going to try cutting a quill pen from a feather, urged on my John A. Parks in his article "The Quill Pen: How to Draw with the Tool of the Masters" (Drawing, Winter 2010). Parks writes: "Looking back at the master drawings from the preceding centuries, we are struck by a lively warmth in the line, a delightful give-and-take between thick and thin, and a glorious sense that the line has a life and will of its own. A quill is a living thing--its wear is uneven, and its behavior can be erratic and capricious. It often obliges an artist working with the quill pen to take risks and adapt to accident and inconsistency." I think it will be good for me to work with an erratic and capricious pen, to take risks, to court accidents, and to embrace inconsistencies. Who knows what lively lines might be trying to escape from me!
Posted by Leslie Moore at 6:56 AM No comments: 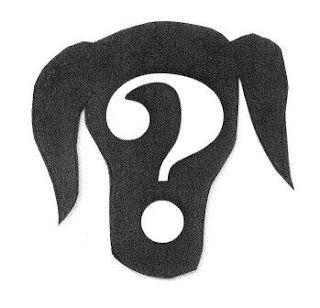 Recently I was commissioned to draw a portrait of an American Water Spaniel for the 25th Anniversary of the American Water Spaniel Club Inc. The breed’s specialty show will take place next August in New London, Wisconsin, where the American Water Spaniel originated. This is a “Made in America” dog! My drawing, which I finished last week, will be auctioned off to the highest bidder at the dog show and the image will festoon t-shirts and sweat-shirts sold during the event.
It’s been a fun project.
I had to go beyond my initial impressions of these dogs. At first glance, they are gorgeous—chocolate brown with coppery eyes, their faces framed by soft spaniel ears, crimped and curled like a Botticelli angel’s hair, and lit with coppery highlights that match their eyes. On second glance, there’s lots more to learn about the physiognomy of a champion. The American Kennel Club, arbiter of all purebred canines, stipulates the following points: "Skull rather broad and full, stop moderately defined, but not too pronounced. Muzzle moderate in length, square with good depth. No inclination to snippiness, The lips clean and tight without excess skin or flews. Nose dark in color, black or dark brown. The nose sufficiently wide and with well-developed nostrils to insure good scenting power. Bite either scissor or level."
Added to the challenge of translating these guidelines—flews? snippiness? scissor bites?—into a perfect portrait of the breed, I had to create a fantasy dog as well. The AWSC Committee in charge of the Specialty wanted the drawing to be as generic as possible, not identifiable as one particular dog. Consequently I was encouraged to produce an American Water Spaniel collage out of the slew of photographs I received from proud AWSC members. This was a tough one for me, as one of my trademarks is creating recognizable portraits of individual dogs. Undaunted, I chose an elegantly posed dog for starters, added another dog’s skull—“broad and full,” sketched in a third dog’s coppery eyes, darkened its nose and gave it the “good scenting power” of a fourth dog, buckled on a fifth dog’s collar, decorated it with a sixth dog’s tags, and wreathed the whole pastiche in Botticelli curls. Rest assured, I avoided snippiness at all costs.
So where is this fabled drawing? I CAN’T SHOW IT TO YOU! It’s top secret until August. But here’s one Specialty Committee member’s reaction to the portrait, just to pique your curiosity:
It is so beautiful it takes my breath away! I have a hunch that this is going to cost me big bucks if I am going to win the bidding war! The dog has such expression. Such intensity shows from the eyes, yet there is an expression of warmth or perhaps tenderness as well. I do love it! Thank you for such a wonderful drawing of our breed.
Posted by Leslie Moore at 9:36 AM 3 comments: 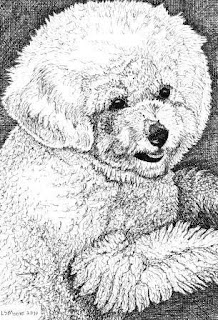 Smokey
5" X 7" pen and ink
2010
I don't know much about Smokey, except that he's a Bichon Frise, he's a sweetie (I can tell just by looking at him!), and that he travels in style in his own deluxe recreational vehicle. Lucky pup!
Posted by Leslie Moore at 7:06 AM No comments: