One of my goals in life is to win the Maine Organic Farmers & Gardeners Association’s (MOFGA)  poster contest for its annual Common Ground Country Fair. The winning artwork not only adorns the fair poster, which is widely displayed throughout New England, but also decorates t-shirts, canvas bags, aprons, etc, and brings the artist $1,000 as well. Achieving this goal may take time. Over the years, I’ve submitted five pieces of art—one pen-and-ink drawing and four woodcuts—to the contest. All to no avail! Here’s a brief history of my saga.

For the 2006 poster contest, I submitted a pen-&-ink drawing, “Twitching Birch Logs.” I thought it was a shoe-in. The price of heating oil was sky high and the thought of cutting and then twitching ones own heating supply home with a team of hard-working horses was not only practical, but oh so romantic! 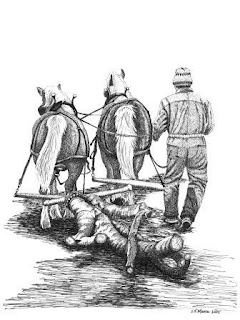 Twitching Birch Logs
8" X 10" pen and ink
2005
No go! The MOFGA judges discourage artists from using crosshatching as shading: “Very, very fine pen lines, spaced closely together in a crosshatching technique, are not cleanly reproducible on cloth,” they say. Not a good omen for this crosshatcher. I also didn’t know that 2006 was the 30th Anniversary of the Common Ground Country Fair. Here’s the winning poster: 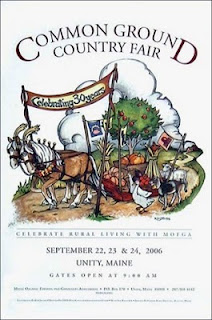 I licked my wounds for two years, and then, after taking a woodcut workshop in the spring of 2008, I submitted two woodcuts for the 2009 poster contest. Again, I thought “Stimulus Package” had it all—both animal and vegetable as well of a foreshadowing of the financial crises to come. I threw in “Kate, a border collie” because each entrant is allowed to submit two pieces of art. 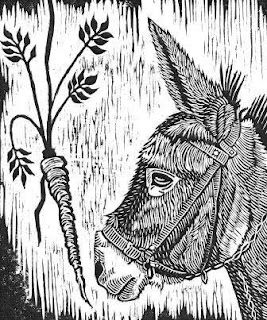 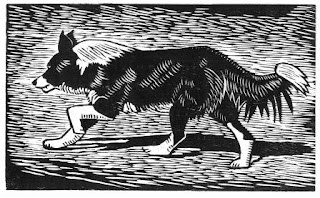 Kate, a border collie
12" X 6" woodcut
2008
No go again! A quick scan of the posters from past years tells you that they really prefer artwork in living color, not black and white. Here’s the 2009 poster: 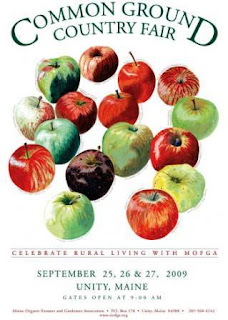 I sulked the next year, until I got a call from MOFGA saying that they were dissatisfied with that year’s entries and asking me to resubmit “Kate, a border collie,” which had been, they told me, one of the top five finalists the year before. Aha! So, fueled with artistic enthusiasm, I not only resubmitted “Kate,” but sent “Arnold Schwarzenegger” along as well. Arnold’s person, Deborah Evans of Bagaduce Farm in Brooksville, even promised her friends at MOFGA that, if Arnold’s woodcut won the contest, she’d bring him to the fair for all three days to flex his muscles and press his fleshy snout to flesh. 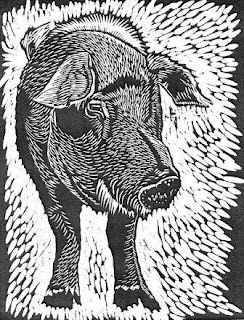 Arnold Schwarzenegger
10" X 14" woodcut
2008
No go yet again! My friend Holly Meade, a fabulous woodcut artist from the next door town of Sedgwick, won the contest with her rampant rooster. I was happy for her. 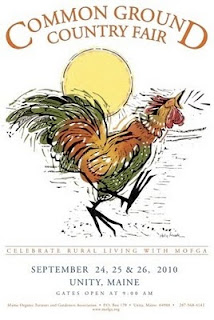 This year, undaunted, I carved a multi-block, five-color woodcut—"Kate Strides Again"—and submitted it with high expectations. 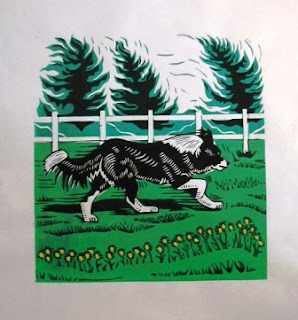 Kate Strides Again
10" X 13" woodcut
2010
My rejection letter arrived in the mail yesterday. It’s the same letter I've received three times before. Only the prize winner’s name changes each year. The MOFGA folks have chosen a still life of fresh vegetables and canning jars by Dacia Klinkerch of Raymond, Maine, for the 2011 fair poster. They haven’t posted the winning artwork on their website yet, but I can’t help but feel that the dog lovers at the fair—and how many of those there must be!—will be disappointed.
Posted by Leslie Moore at 11:12 AM 3 comments: